Hillary Clinton’s Visit to AM General

On Tuesday, April 26th, Hillary Clinton made her way to Indiana with a stop at the AM General motor plant, where she talked about the importance of keeping and growing American manufacturing jobs in Indiana and the US. 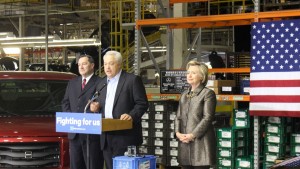 Secretary Clinton made a stop in Hammond Indiana earlier on in the day as well to talk about manufacturing in the US to go along with her “Make it in America” campaign. During Secretary Clinton’s speech, she spoke about how much confidence she has in the auto industry in America, and how greatly Indiana residence rely on the auto industry. According to Clinton, roughly 100,000 people in the state of Indiana work for the auto or manufacturing industries. She also reminded the crowd that she fought to save the auto industry back in 2008-2009, unlike her democratic opponent, Bernie Sanders.

After Hillary Clinton’s Speech to the crowd, we spoke with Brendan Jurgenson, who has been an employee at AM general for 12 years. Brendan told us that even though he is “not a huge Hillary supporter”, he still thought that her speech overall was powerful. He also mentioned that he thinks the auto industry is on the verge of either crashing once again, or rising to new levels. 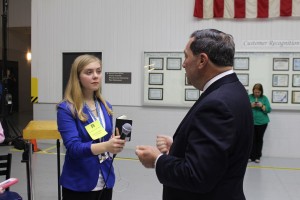 PNN reporter Emily Vetne received the chance to speak with South Bend Mayor Pete Buttigieg, along with Indiana Senator Joe Donnelly. Buttigieg and Donnelly both seemed to be pleased with the comments and issues Clinton tackled at the event. They also both wanted her to know the Hoosiers are hard working and inclusive Americans who never give up.

PNN thanks the Hillary Clinton campaign and Sarah Pollack for allowing us access to tonight’s speech.