On Wednesday, September 26th, the Penn High School powder puff team had their one and only game of the season. As the girls headed out onto the field, nerves and excitement were flowing through the air. With four games happening that night, no one knew what was going to happen.

As the freshmen took on the juniors, in the first game of the night, the juniors showed their dominance. After a twenty minute game, the juniors were able to score a touchdown raising their score to six points. After the twenty minute game between the freshmen and juniors, the juniors took the win ending the game with six points and the freshman zero points. While being interviewed about the game, junior Annabelle Curylo said “One down, one to go. A lot of us were thinking about playing the seniors even though they had not yet won. There were definitely a lot of nerves for the next game we were going to play but we all just relaxed and watched the seniors play to understand how they worked.”

As the seniors and sophomores went head to head, the juniors sat back in anticipation to see who they would play in the championship game. Within the first five minutes of the game, the seniors took the lead after scoring a touchdown. Students, and athletes, Anjelica Zitto and Annabelle Curylo, said during their interviews that they were scared to play the seniors because they were “tough and brutal”. Anjelica Zitto specifically said that she was scared that she “might get a concussion from playing them because they were very violent especially when we were beating them”.

In the third game of the night, the freshman took on the sophomores to see who would end up in last place. Neither team wanted to be in last which meant the defensive team worked as hard as they could to make sure no one scored. Eventually, the freshmen were able to score a touchdown. The game ended with a score of eight points to zero points.

As the juniors and seniors walked onto the field, nerves were flying through the air. With everyone expecting the seniors to win, the game was a shocker. Eight minutes into the game, the juniors were able to score a touchdown adding eight points to their total. The juniors kept up the fight for the rest of the game not allowing the seniors to score any touchdowns. The seniors also put up a good fight not allowing the juniors to score any more touchdowns. After the long twenty minute battle, the juniors became champions. Anjelica Zitto said “I feel honored because it was my first time playing and we beat the seniors, which we were supposed to let them win” explaining how she felt about the big win. 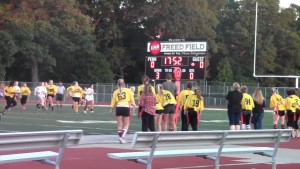