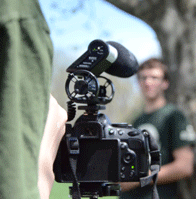 Do you want to make short films? Great! We have the club for you, The Penn film club!

About The Penn Film Club!

Penn Film Club will operate as a fun way to convey creativity, ideas, and important messages to the student body without the need for an explicit skill set. There are many roles both in front of and behind the camera, all equally valuable. The club serves as a way to develop skills such as creative writing, acting, and operation of filming technology. All members will have opportunities to try different positions and see what appeals most to them personally. We aim to provide as inclusive and fun of an environment as possible, while also having the chance to discuss relevant issues of which to address in our productions.

What happens in a Penn Film Club meeting?

Penn Film Club meetings will differ depending on how far along in a project the club is.

·  Early meetings would involve viewing a short film, and compiling a list of qualities the film had that made it fun to watch, meaningful, etc.

·  We will then discuss current issues, and brainstorm a way to subtly address them in a film while trying to include some of the qualities compiled earlier.

·  The most exciting part of the experience will be the filming itself. Members have the chance to fill one of  many positions necessary for production

What positions are available to members?

There are a multitude of duties available to members of Penn Film Club depending on the level of involvement they seek. These include Director, Script-Writer, Camera Operator, Sound Technician, Actor/Actress, and Makeup/Costumes.

During production, Penn Film Club will record the short films at different locations throughout the community. Locations are subject to change based on the environment the short film requires. Locations are vetted to insure safety and owners are asked if filming on their property is allowed beforehand. At least one Adult will be present at all times. Permission slips are given to members for guardians to sign at least 3 days prior to filming unless absences or unusual circumstances take place.

If a parent, guardian, or family member would like to assist in the filming process as a chaperone or a means of transportation, please have them contact Penn Film Club at least 3-5 days before production. Permission slips will be distributed 1-2 meetings prior to filming requesting approval for off campus filming and including a portion about how non-members can help out. Any and all involvement is greatly appreciated, and will be included in credits of that particular film.