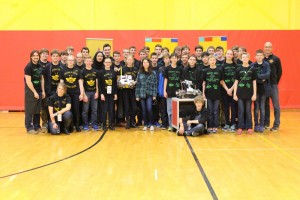 All three of the Penn FTC Robotics Teams competed at the regional level Sunday the 17th of January. Unfortunately, while none of the teams were able to move on to State, Team 4600 finished in 4th place, Team 4601 placed 7th, and Team 6360 placed 14th. Penn Robotics is split into four teams. One team, First Robotics Challenge or FRC, is an advanced league for 11th and 12th graders, while the other three teams, First Tech Challenge or FTC , are open for 9th and 10th graders.

Starting next year, FTC will be offered as a class for the first time at Penn. If you don’t have an open elective, and you still want to be in robotics, you can take a zero hour class, meaning you would have to come in before or after school two or three times a week. 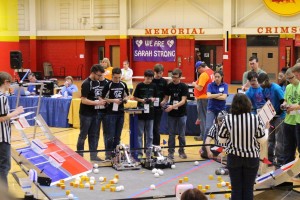 If you want to be in robotics during your Junior and Senior year, you can take the class for FRC. FRC has a zero hour class too, but you need to be in the day class to take it. If you are interested, the class codes for FTC are 602 for the zero hour class, 612 for the freshman class, and 614 for the sophomore class. The codes for the FRC classes are 677 and 678. There are no prerequisites for joining the class, so it is open to anyone.

For more information you can email Mr. Langfeldt at jlangfeldt@phm.k12.in.us, go to The Robotics Website, or stop by his classroom room 140. The FRC team is having their first competition on the weekend of March 11th-13th down in West Lafayette. Make sure to check back for important updates about the classes, and news about the FRC team.