An Introduction to “Dune” 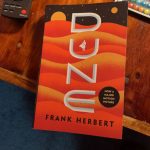 In 2021, Dune: Part One hit theaters and received love from fans and critics alike. The movie follows a young Paul Atreides (played by Timothee Chalamet) and his powerful noble family in the year 10191, as they move to a new planet called Arrakis, or Dune. Filled with psychadelic spice, intelligent witches, long prophecy, prisoners-turned-soldiers, sand people, and giant worms; Dune is an epic movie. But this is not the first time the incredible story of Paul has been told.

The original Dune novel was released in 1965, and is considered a classic of the Sci-Fi genre. The story is essentially the same as the movie, but it tells a much fuller, and far more deep story. In preparation for Dune: Part Two, releasing on November 3, 2023, I read Dune in it’s entirety over Christmas break. Here’s what you need to know about the book before the new movie hits theatres.

An Introduction to Paul

Dune opens with Paul’s first encounter with the Reverend Mother Mohaim of the Bene Gesserit. The Bene Gesserit is an order of extremely intelligent women who have extreme control of every muscle in their body, and understand how to manipulate not only in single conversations, but families over years, and civilizations over millennia. They are only women because men are not able to control themselves as women are. In this first encounter with the Reverend Mother, their power is not only demonstrated to Paul, but the reader as well. Paul is tested with the gom jabbar, where he must keep his hand in a box, or else he will die. As his hand remains in the box, Paul experiences intense, incomparable pain. But he remains, and passes the test. This proves to the Bene Gesserit that he is human.

As I’ve mentioned, the world of Dune takes place in the far future. At this point humanity had developed more powerful AI than themselves, were enslaved, then held a revolution called the Butlerian Jihad, and unlocked the true intelligence within themselves. So they outlawed all computers, and instead trained bio-computers known as Mentats to do all the calculating, predicting, etc. The test of the gom jabbar proves that Paul was in control of his body enough to endure the pain enthralled on him, showing he is not an animal. He feels pain unlike a computer, and controls his body unlike an animal. He is human. But that does no mean he is not special.

The Conflict of the Great Houses

Paul is of House Atreides, led by his father Duke Leto. House Atreides is one of the great houses in the Empire. The empire is ruled by Padishah Emperor Shaddam of House Corrino, and his daughter Princess Irulan is also a member of the Bene Gesserit. Another important house is House Harkonnen, led by the Baron Vladimir Harkonnen, Duke Leto’s mortal rival. The main plot of Dune revolves around these three houses, and the control of the planet Arrakis.

Arrakis is the only planet in the known universe to create a spice called melange. What made this spice so valuable, was it’s use by the Spacing Guild. The Spacing Guild are basically the people that make interstellar travel possible, and carry around anything and anyone for the right price. But the Guild’s key to interstellar travel was the spice. So whoever controls Arrakis, controls the spice trade, and therefore becomes very, very rich.

Before the events of Dune, House Atreides inhabited Caladan, and House Harkonnen controlled Arrakis. But just before the book begins, the Emperor orders House Harkonnen to leave Arrakis. He then sends House Atreides to take control of the planet instead of the Harkonnens. This is a part of long scheme everyone in the story seems to recognize. Something isn’t right about this sudden change of control, especially among such rivals. This is when the real story of Dune begins.

I don’t want to share anymore of the plot just because with all the information I’ve given, you’re in for a real treat. One of my major critiques after finishing the book for myself was that not everything is explained perfectly or simply, and with a story of such epic scale and incredible storytelling, it is not deserved to be ignored because of possible confusion.

Dune is not a straight forward story, but that’s exactly what makes it so exciting. With plans within plans within plans and loads of internal monologue, the character development is unmatched and there’s nothing quite exactly like it. I’d give the book five stars, and would recommend it to anyone willing to give it a try. If reading is not your greatest skill of liking, the movie also has plenty to offer. It is not the same of course, but Dune: Part Two comes out November 3rd this year, and is predicted to wrap up the story well. But even if it doesn’t, we’ll always have the incredible classic novel to read instead.