Changing of the Guard

Big changes are happening in the athletic office at Penn High School, and it’s not just what’s occurring outside at Freed Field.

Mr. Aaron Leniski is officially stepping down as head athletic director, and is passing off the title to Mr. Jeff Hart, head girls’ soccer coach and business personnel.

Both Leniski and Hart are exploring new aspects of their job while trying to finish what they started. Whether it be another girls’ soccer state championship or finishing the locker rooms at Freed Field, both intend to leave their signature on their jobs, as well as create new titles for themselves in new roles in the corporation.

Hart celebrates with his team in the 2017 victory over Gueirn Catholic.

So, in order to finish doing what Hart loves through coaching, he will continue to coach the girls’ soccer team at Penn High School, as well as be a full time athletic director, husband, and dad.

When asked if he thought there would be conflicts to address, he stated, “I think [there] potentially could be. One of the advantages I have on the soccer side is that I have an outstanding staff. They’ve been with me now for 5 or all 6 years, so we have a very good idea of what we’re all about, what we want to accomplish… so that’ll help a great deal, but there will certainly be some conflicts I’ll have to address.”

However, Hart realizes that there are more sports than just soccer at Penn High School, and he fully intends to focus on the betterment of all student athletes.

A visual from the South Bend Tribune of the Freed Field locker rooms.

Although student athletes are a big part of the job, there are other tasks that need to be fulfilled as an athletic director, such as finishing the project at Freed Field. The project started under Leniski, and he and Hart will continue to bridge their thoughts and ideas about the next step in the construction process.

Leniski isn’t stepping out of the Freed Field spotlight, but he is stepping into a new role at the central office as the acting Chief Operating Officer, or COO, of the PHM Corporation. After being a teacher, principal, and athletic director in the school system, Leniski believes he has found the right fit for him at the central office. 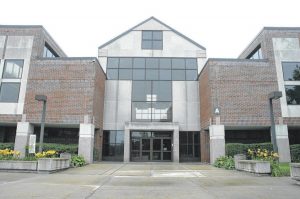 The setting for both Leniski and Hart as they continue to thrive in their new roles. (via South Bend Tribune)

“… There’s no day that looks the same, and that’s exciting for me as well. One day I might come in, and we have an issue with transportation… it could be a situation [and] we have storms come through, and on those nights you don’t get any sleep. We just have to make sure we have everything in place so that students can come in and the teachers can come in and have the environment that they’re used to.”

Both Hart and Leniski have high hopes and high expectations from their new jobs, both through the community and the students, and they each hope to continue to see Penn High School thriving in their new roles.