On November 16th, yet another Dumpling Party was hosted by the Chinese Club here at Penn High School. Chinese teacher and adviser of the Chinese club, Mrs. Wu, helped the party move along with fun and ease. The Dumpling Party focused on learning Chinese culture and how to properly make traditional Chinese dumplings.

On November 16th, Chinese Club members gathered in room 144 where they played games from China. The “heritage students” (students with personal experiences with Chinese culture outside of the class) teach their friends and classmates the rules and history of the games.

“Chinese Checkers” is a traditional Chinese game that the students played.

When the club was ready to make dumplings, they all piled into the FACS room (Family And Consumer Sciences Classroom) and wash their hands before they touch the food. Some parents of students attended the meetings as well just to help out with the process. During this time, Mrs. Wu taught the students how to address their elders in Chinese.

Slowly and patiently, the women who were helping out the students show them how to push and cover the meat inside the dough cover to make a dumpling. After the raw dumplings have been prepared, the students put them in a boiling pot of water and cooked them from 15 to 20 minutes until the dumplings were ready to serve. 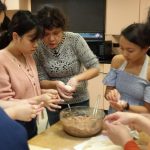 A woman helps Tram Phan with a dumpling.