Crisp air, that chilly breeze, Halloween right around the corner. This really puts you in that Halloween mood. Niles Scream Park is the perfect place to hang out this October.

There are multiple attractions, such as the ever famous Niles Haunted House, Field of Screams, and Haunted Hayride. Along with these are the new attractions: Possessed and Incarcerated.

The Niles Scream Park website describes Possessed as a family who suspected paranormal activity in their new home. Their dog would bark frequently, “lights and appliances would turn off unexpectedly,” and everyone would wake up to the sound of screaming. The family tried to communicate with the spirits and “foolishly purchased an Ouija Board,” which “unknowingly opened a portal for the undead.” This attraction is sure to give you a fright.

The website also describes Incarcerated as a Four Flags Penitentiary which was a “maximum security prison for inmates who were sentenced to death.” The prisoners were used as test subjects for medical research and psychological testing since their lives no longer mattered to anyone but them. The public was outraged by these rumors, so “to justify the death penalty in the public’s eye and gain public support, the prison administrators plotted to fake a violent 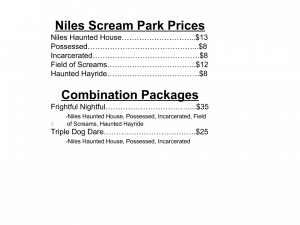 inmate riot.” The tables then turned as “the inmates collectively turned on the prison guards and overthrew the penitentiary.” If Ellen Brockmole | PNNyou weren’t already scared, this attraction will make sure you are.

Ethan Yoder, a freshman at Penn High School, visited the Niles Scream Park a couple weeks ago for the second time. He described his visit as “fantastic.” He said he’s “not usually one for scary things”, but the park changed his mind and it ended up being “one of the best and most fun experiences” of his life.

Whether you visit the Niles Scream Park with friends or family, you better come ready for a night full of fear and fun!