Penn mourns the loss of a classmate

Kingsmen senior, Jack Lane, lost his life in a car crash Thursday night around 10:30 pm in a single car crash on State Road 23.

Corporal Jason Dziubinski, police officer and traffic investigator for the Saint Joseph County Police Department said, “I could see some tire marks that went off the east side of the roadway, in the grass and the gravel, and those continued to the north or northeast onto the main travel portion of the roadway.” 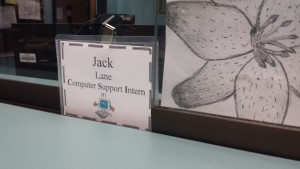 In Lane’s memory, students from the Chromebook support class have displayed his name tag prominently in the ITC.

He explained, “we think at this time that speed was a determining factor from the distance of the yawl marks and the portion of the roadway the vehicle traveled prior to striking the tree, and also the amount of damage that was on the vehicle that was consistent with a high speed crash into a tree.”

“I’ve been working with Jack since the beginning of the school year as an intern. He was one of my strongest interns from day one. He taught me a lot and he was someone I could count on.”

“We were on a first name basis,” Sinish continued. “He [is] definitely someone who will be missed greatly and deeply.”

Grief counseling will continue to be available to Penn students.

Jack Lane’s visitation will be held at the McGann Hay Funeral Home in Granger from 4:00 to 7:00 pm on Tuesday, December 8th. The funeral services are to be held on Wednesday at 11:00 am, also at McGann Hay.