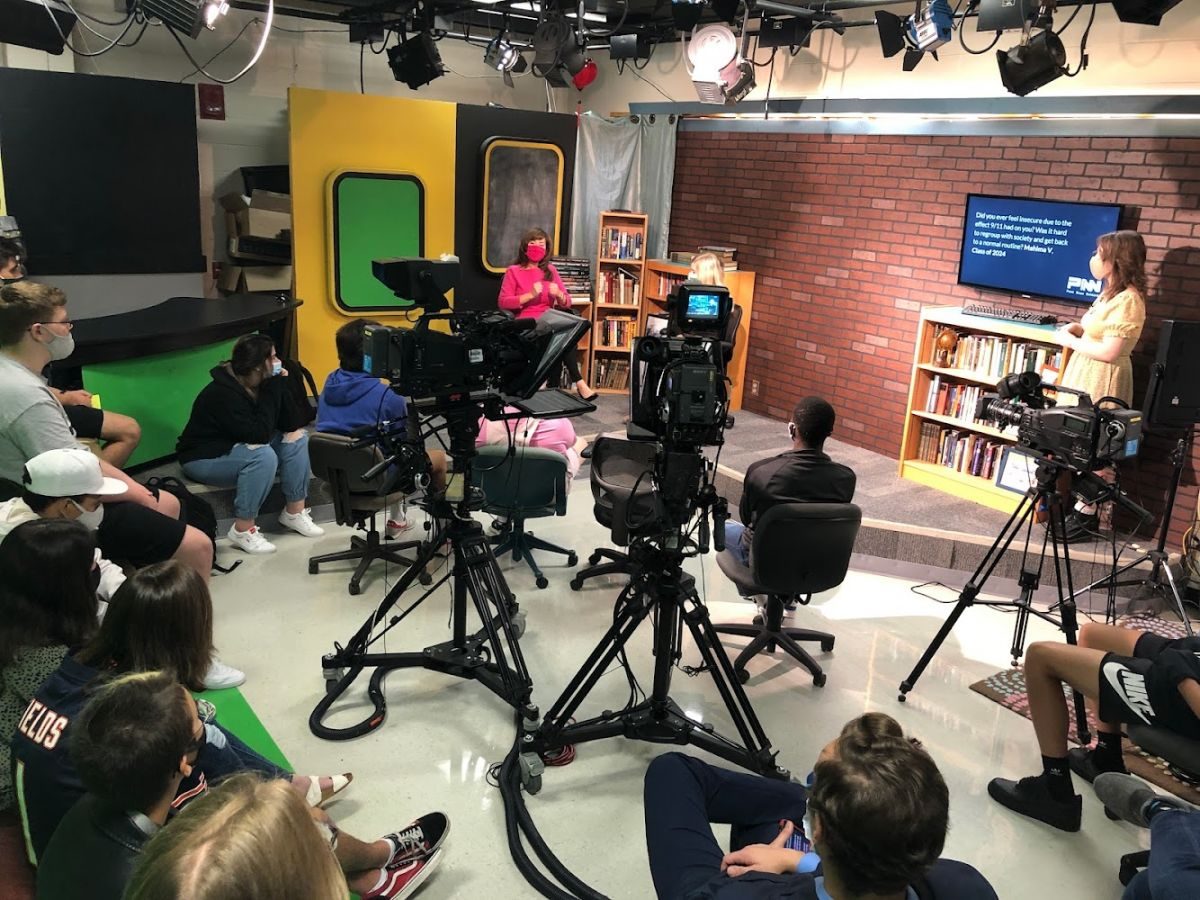 Last Friday, on September 10th, the PNN Studio received a special visit from, Ms. Cindy Laney, a 9/11 survivor who has wanted to tell her story for a long time. As a matter of fact, some PNN reporters got to sit down with her and ask her a couple of questions about her experience on that horrific day.

On September 11th, 2001, the worst attack on American soil unfolded. Four planes were hijacked, two of them hitting both towers of the World Trade Center. Another plane impacted the Pentagon minutes later, and a final fourth plane, flight 93, crashed in a field, near Shanksville Pennsylvania.

The attack changed America forever, causing millions of civilians to question their safety and security. One of these civilians is Cindy Laney.

At the time, Ms. Laney worked in lower Manhattan at a business called Securities Training Corporation, just a couple of blocks away  from the World Trade Center. She frequently went to the towers saying that,

The towers were a significant part of her life, and it all changed on that fateful day.

The North Tower is Hit

On that day, Ms. Laney took a subway to Bowling Green Station to get to the World Trade Center.

She wanted to get some of her Jewish clients cards for Rosh Hashanah and planned on being late for work. However, as she exited the subway to the streets above her, she looked around at all of the New Yorkers deadlocked.

“Usually people would be buzzing around . . . everybody’s on a mission it’s here, here, A, B, no eye contact. But that day, people were standing still”.

Laney suddenly peered at what all of the people were looking at, and was met with a horrific sight. The north tower of the World Trade Center was burning and billowing with thick black smoke.

In fact, she had to get to work 30 minutes early each day due to the rigorous safety check routine that she received before she was able to enter the World Trade Center. However, she added that “ I don’t think that anybody anticipated, as common citizens, that the terrorists were thinking about hitting buildings with planes.”

The South Tower is Hit

At this point, Laney had already witnessed the north tower burning, but just like many people, assumed that it was an accident. Determined to get the cards for Rosh Hashanah, she continued her trek toward the south tower.

At 9:03 a.m. Laney was on Greenwich Street, just five minutes away from the south tower when she heard a plane. At first, she thought that it was “a crop duster” that was flying low to put the fire out in the north tower.

The plane flew right over her head, tilted, and hit the south tower. The first thought that went through her mind was, “Why are they filming a movie and not telling us?”. However, that thought quickly vanished when she saw the massive orange explosion and heard the “crushed” screams of the people around her.

“We are definitely under attack and this is no coincidence.”

After the south tower was hit, Laney ran toward Battery Park where she could get on a payphone and notify her family that she was alright. Waiting in the long line, she heard someone say, “that south tower is coming down”.

The south tower was hit much lower, and at more of an angle, so the structure of the building was significantly more damaged than the north tower. “What would that look like?” thought Laney, as she processed how one of the world’s tallest skyscrapers would collapse.

As Laney and the people around her continued to stare at the towers, they began to notice small objects falling off of them.

“that wasn’t metal . . . those were people, making a choice between burning alive or just ending it by jumping.”

Laney said that in the crowd of people, “We held each other, and thought . . . this was it. We’re dead”. To her surprise, the south tower fell straight down but left a cloud of thick debris rolling towards them.

As the grey smoke began to cover them she thought, “These are the ashes and dust of people, and metal, and asbestos, and God knows what.”

Standing there for a couple of minutes, Laney started to realize that she wasn’t going to die. The wind was blowing the opposite way and started to clear the grey smoke around her. Coming from the North were police officers in black SWAT gear, guiding Laney and the other citizens away from Battery Park.

With the subways open again, Laney took one rode to Brooklyn and noticed the number of eyes staring at her. “Everybody’s staring at me because I’m covered with ash.” A lady in her car then came up to her and asked, “You were there?”. Laney responded with a simple “Yes”. The lady began to tell her that she actually worked in the south tower, but left after the north tower was hit.

The people in the south tower were told to remain calm and get back to work, but this lady refused and left with her life.

After 9/11, Laney continued to work in Manhattan but noticed the iconic part of the city that was missing. “It was a huge loss in your head and in your heart” she described.

The tragic event has had a major impact on Ms. Laney’s life, going as far as to say,

“That is the reason I had Jack, because I knew I had to get on the ball if I wanted to be a mom.”

She closed out the interview with a few wise words about division with the current discussions on 9/11. She said,“ that tells me that the guys that flew into the buildings that day won. So please people, let’s fix this and get along again and be really, really careful with what information we trust.”

To Laney, telling her story is cathartic and therapeutic. It makes her feel better and believes that it is a mission that she has been charged with as a survivor. Other survivors of 9/11, like Laney, are charged with this same duty, so it seems only fair that the rest of America does their part. As citizens of this country let us be the stewards of truth in never forgetting what happened that day. And let us never forget the lives that were lost.

When Ms. Laney came to Penn High School the PNN news team invited her into the studio to speak in-depth on her experience on 9-11, 20 years ago here is the show we shot on that day