After much practice and anticipation, this Thursday and Friday, Penn High School’s theatre department will perform Radium Girls. This long-awaited play will premiere on October 4th and 5th, at 7:00 in the studio theater. Tickets are $5, and can be purchased online or at the ticket booth before the show. 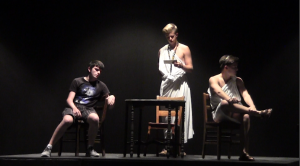 The company discusses how to handle the radium situation.

Radium Girls is a true story about women who worked in factories in the 1920s. These women used radium paint to paint clock faces, poisoning themselves without even knowing it. When the correlation between radium and the girls’ sickness was realized, the factory tried to cover it up, which forced the girls to take the company to court to fight for their rights as workers. Many of the labor laws and protections we have in place for workers today is thanks to the efforts of the “Radium Girls”.

This play, by D.W. Gregory, has entered show week for our theatre department. The studio theater has been busy every day, filled with stagehands moving props, actors and actresses practicing, and Mrs. Ryan, the director and Penn’s theater instructor, giving guidance and final remarks. Everyone involved is thrilled about the show, to include Katie Byers, a sophomore who plays the lead role of Grace Fryer. 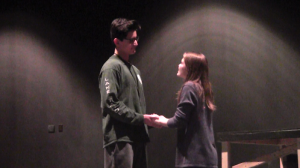 Grace and Tom stand together, dreaming of a bright future.

“Suddenly we’re here, and it’s almost show week, and it’s been so much fun working with all these people,” she said in an interview with Penn’s Film Club. “I love making shows, so much.”

The enthusiasm has been evident in the actors, but this play in particular comes with an added challenge–it’s a real story. The theatre department is under pressure to do justice to the real people and what they went through. Monte Teeple, a senior who plays the complex antagonist Arthur Roeder, confided that the cast understands the gravity of their performance–a final remark in his interview that presents the objective of the cast.

“We face the challenge of making sure that we do justice to the story, because these were real people,” he said. “If we don’t do the story justice, then it’s almost as if it never happened at all.”