The third and final day of festivities came in full swing for the Penn Advanced Jazz ensemble. It was competition day, and the twelve big bands from around the country were ready to perform after months of preparation.

Students rose from their slumbers filled with determination when the room phones rang promptly at 7:30. Gathering our final belongings, we assembled in the hotel lobby for final instructions and boarded the buses to the Lucas Theatre.

It was hot and humid when the bus pulled in at the venue. After quickly unloading instruments, mutes, and music, many students were pleased to find themselves in an air conditioned warm-up room. We put together all of our equipment, had a brief warm-up, and prepared to take the stage.

The stage was spacious and beautifully decorated, and the main level was packed with proud parents and jazz enthusiasts. We performed Night Train (featuring Eric Wistreich on tenor saxophone, Colin Thomas on guitar, and David Richards on bass), Quietude (featuring Mahmoud Al-Fadhl on flugelhorn and Giselle Goad on piano), and Blues and the Abstract Truth (featuring Colin Thomas on guitar, Peter Lehmann on trombone, Hunter Wolfram on baritone saxophone, Mahmoud Al-Fadhl on trumpet, and Daniel Andrews on drums). 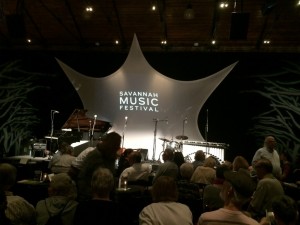 Mr. Leather was very pleased with the ensemble’s performance. He met with the students after the finalist announcement and said that the ensemble’s playing that day was “…the best it’s been in years.”

After a brief meeting, we had time to grab a bite to eat and explore even more stores and sights in Savannah. It was less humid, and many students opted to treat themselves to ice cream at Leopold’s – a staple in Savannah.

A thunderstorm hit at around 6:00. However, by then, the ensemble had (mostly) reconvened at the Lucas Theater to view the finale performance of the Swing Central Jazz Festival, featuring the top three bands: those from Dreyfoos School of the Arts, Agoura Hills, and Lovett. After the three finalist bands performed, another band took the stage. They played a composition by Wycliffe Gordon as a soundtrack to the silent film titled Within Our Gates. It was a fascinating show and the music timed perfectly with the movie, adding indescribable depth and character to the film.

After this performance, there was one more: the Judges’ Jam. A favorite of students who went on the trip a few years ago, the Judges’ Jam is comprised of the clinicians we had been working with throughout the week, featuring them playing killer solos and, well, jamming! Seeing the level of interaction and creativity in each musician was a sight to behold. As Mahmoud Al-Fadhl put it, “it was the perfect send-off to the perfect trip.” 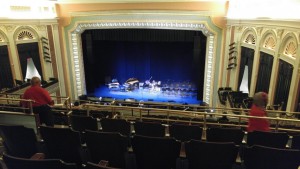 We would like to thank you once again for following us on this unforgettable journey! This is an experience that will live in our hearts and memories for the rest of our lives, and we are glad that we could chronicle that here so you could join us. The Penn Advanced Jazz Ensemble would also like to thank PNN for allowing us to communicate back home and keep the community informed on our adventure!