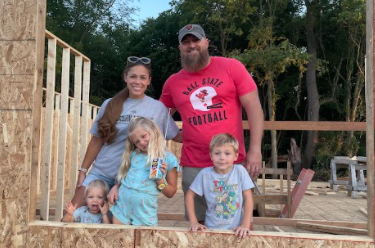 This year the Building Trades classes have the opportunity to build the Wetzel Family home. Mr. Wetzel and Mrs. Wetzel are both teachers here at Penn High School, and they have three children, Sofie, Tyler, and Celia. Mr. Crooks, the Penn Building Trades teacher, said of the family, “they are a great couple to work for.”

One positive about the move is that their new home is closer to Penn High School. “We live in South Bend…which is about 25 minutes away from work every day, which was fine for Mr. Wetzel because he worked at Riley so he had the short commute and I had the long commute. But now that he has the job at Penn we were like ‘We really should move closer.’”, Mrs. Wetzel states.

Another positive (especially for the kids) is that everyone gets their own bedroom. Mrs. Wetzel had her third child in June 2020. Her current home has three bedrooms and as Mrs. Wetzel explains, “…which was okay when we had two children, but when Celia was born we had to figure out who was going to share rooms and it just didn’t work.”

The new house should be done sometime in May, with the Wetzel family moving in shortly after. The Building Trades takes about the entire school year to build a house.

Now, of course the adults are involved with most of the decisions but so are the kids. Mrs. and Mr. Wetzel aren’t the only ones excited. Mrs. Wetzel says, “They (the kids) really were not that excited at first…but when they started to dig the hole, that was really exciting…and they love picking up all the nails on the ground. They also really love watching the process of it all.”

“I think they (building trades classes) always like having teachers. It helps because we know some of the kids and stuff like that from the school so it’s been awesome and we’re really excited. We drive up there almost every day to just look at it,” said Mr. Wetzel.

Senior, Adam Wroblewski realized that the skills he built were for life. “This class is super important to me because I plan on going into construction for a living so being able to do this (build houses) in school is very helpful.”

The class recently put the walls up and the shingles. The inside of the house is all framed out and they just poured the cement in the basement as well as the porches and garage. “Everything has been ordered so soon the outside will be done and we can start working on the inside as winter comes.”, Mr. Wetzel says.

When asked about the final build, Wroblewski says, “I am excited to see it mostly because I want to see what Mr. and Mrs. Wetzel will think once they see it.”

Usually, around fifteen students work on a build, but this year there are so many students that there is an AM and a PM class with 38 students working together on the same house. Work flows faster and more efficiently. Around this time of year there wasn’t any citing but now they are about 90% done with the house.

“It’s definitely not as stressful (than last year) and more easy going. There’s definitely stress involved with it because that’s just inevitable when it comes to construction but it’s not as time pressured as it was before,” said Wroblewski.

With the build going faster this year, the building trade classes will complete the home sooner than expected. With the spare time the students have, they will build some play set equipment for a ministry in South Bend and other volunteer projects.

The biggest challenge has been the two classes, making sure everyone is busy and getting materials there so students can have something to do. After taking building trades, most students go into construction as a career after graduation.

The build has been a feel-good project for everyone involved. “I would like to add a big huge thank you to Mr. Crooks for putting up with our family. He just knows how everything’s going to go, so serious big shout out, he’s pretty awesome,” Mrs. Wetzel said.

There will be a grand opening and reception in May. People will be allowed to tour the house, talk to the builders, and get a look at what is planned for 2023. Stay tuned to PNN for the date of that event.