Congresswoman Jackie Walorski presented the Congressional Art Awards to a group of selected students at the South Bend Airport on Saturday, May 14th at 9AM. Seven students from Penn High School placed among the top ten.

Two of these students had more than one piece that made the top 10. So as a result, Penn received nine out of ten awards. The 1st place award winner and winner of the second round, Mckenzie Blankenbaker, and her piece made in 2nd year drawing class. In addition the reward, Blankenbaker received tickets to the unveiling ceremony in Washington DC. 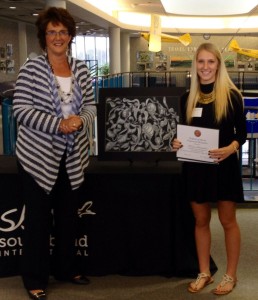 2nd place went to Penn’s Akane Tokusumi for her scratch drawing done in 3rd year drawing class. Other students from Penn in the top ten included: Adrianna Waldron for a photo, Matt Rzeszutko for a lino print, Jeremy Sullivan for a drawing, Madason Whittaker for a lino print from 1st year drawing, Breyanne Urbin for a drawing, Akane Tokusumi for a plexi print, and Mckenzie Blankenbaker for a drawing. Be sure to congratulate the winners and keep making art for your own chance at the Congressional Art Award for Indiana.