History, ecology, and community, the world of the Indiana Dunes 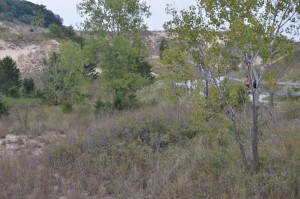 A peaceful place with rich history, a diverse ecosystem, and a strong, supportive community. An area with forests, tracks, woods, and beaches. A place to hike, to enjoy nature and its wildlife, and to feel the wind and sun rest comfortably against your skin. A place away from the gray bleakness and destructive forces of industrialism and instead left to the vibrancy and swaying strength of nature. The Indiana Dunes National Lakeshore and Park is to be a sight to see and an experience to remember for anyone who visits.

The Indiana Dunes and National Lakeshore has been fought for fiercely by a strong and caring group of individuals who loved the area and wished for it to stay in its natural state instead of being washed up by industrialism. The life of the Dunes begins in 1899 with botanist Henry Cowles from the University of Chicago. His work at the Indiana Dunes quickly made him one of the more notable ecologists in America and his findings brought attention to the diversity and adaptable wildlife that inhabited the Dunes, increasing interest in the Dunes area.

Lake Michigan formed around 11,000 years ago when the Wisconsin glacier began melting. With it came a large array of seeds that formed the many diverse biomes that can be seen today. But the natural beauty of the Dunes was put under strain with a rising number of steel mills in the early 20th century and the long lasting effects of pollution. 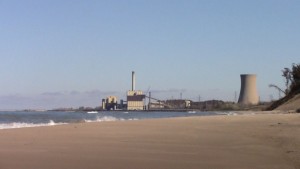 Pollution affects the Indiana Dunes National Lakeshore; steel mills surround the Dunes on the western shore, and split the park in half. Even today, there are instances where nature and industrialism clash. The pollution seeps into the lake waters, and, according to Park Ranger Bruce Rowe, “[From] coal fire plants and steelmaking we get fallout from that into our water which can affect obviously the acidic conditions…closer to the source of the pollution the fewer and less variety of lichens…so there are certainly some plants obviously animals who are affected by air pollution and water pollution.” 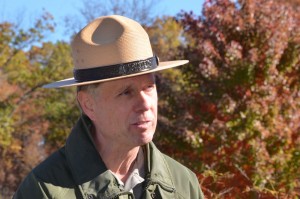 Bruce Rowe, a park ranger at the Indiana Dunes National Lakeshore and park, is interviewed by a PNN reporter.

Because of human interaction in the Dunes and the rising levels of pollution, many species, including the Karner Blue Butterfly which, according the the US Forest Service’s website, is an endangered species due to human environment interaction.

After World War One, an Indiana state park was established in Cowles’ honor, but it wasn’t until 1966 when Congress authorized the creation of the Indiana Dunes National Lakeshore along the southern shore of Lake Michigan.

However, Congress might never have authorized the Indiana Dunes National Lakeshore if it wasn’t for the tireless efforts of unsung heroes such as Dorothy Buell, who was most likely the most prominent figure in the push for a national park. Buell was an English teacher and grew up on the lakeshore, according to the Lowell Milken Center For Unsung Heroes. She had grown up with many happy memories of the Dunes and spearheaded the push for the Dunes to become a national park with the slogan, “Save the Dunes.”

With the rising threat of steel mills in the area, Dorothy Buell and some local women founded the Save the Dunes Council in 1952. In their efforts to free the Dunes from the grasp of American businessmen and politicians, the Save the Dunes Council caught the attention of Illinois Senator Paul H. Douglass. Senator Douglass encouraged other people to join together and push for a national park all the way to Washington D.C.

Soon after, the hopes for national parks across the nation began to rise as more and more people rose their voices in support of protecting natural resources. The president at the time, John F. Kennedy, supported the preservation of National Parks, and between 1963 and 1964, Kennedy signed a compromise that allowed the area to be preserved while also satisfying the industrial needs of post World War II America. In subsequent years, the size of the Dunes has increased to a little over 15,000 acres, according to the National Park Service.

U.S. Senator Joe Donnelly and U.S. Representative Pete Visclosky introduced a legislation on September 29, 2016, that would give the Indiana Dunes National Lakeshore the name of Indiana Dunes National Park. This name will bring both awareness to the diversity of the Dunes and have the benefit of stimulating the Indiana economy by tourism, according to a press release made by Visclosky. This legislation would give the United States it’s 60th national park. 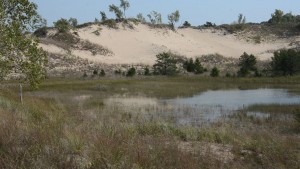