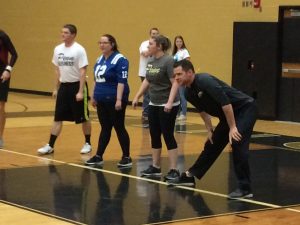 Mr. Galiher and his team get ready for their match.

many teams competed on the hardwood of the main arena and the auxiliary team.   Teams ranged from middle-school to adult.

Geno Hoath, 2018 tournament champion remarked on finishing at the top of the heap.

“The victory could have been more satisfying but a win is a win in my head.” Hoath may be referring to how the championship came to be from a boundary violation. 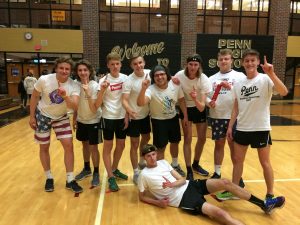 Congratulations to Mr. Ball and his staff on a well run tournament.  Though he only raised about a tenth of what Mrs. Ball raised in the Penn Dance Marathon, it was a great night that raised money for a great cause.