The Penn IMC was abuzz with activity when the cultural festival opened Friday night. There were booths from Spanish Club, French Club, Japanese Club, Korean Club, German Club, and Chinese Club, as well as the ENL (English is a New Language) classes and an Indian booth. Many booths featured tasty treats, such as dumplings, guacamole, crêpes, and German chocolate pies. Others featured cultural items, such as Japanese kendama, Spanish papel picado, and Chinese character-writing paper. 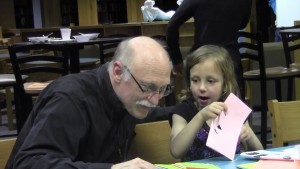 After about 45 minutes of checking out the booths, the guests were called to the back of the IMC to watch performances by all of the clubs in attendance. The performances were very heavy on crowd interaction, guessing the shapes one performer was making with a toy then being called up on stage to dance with the next performers.

Overall, this year’s cultural festival seemed to be a big success. The administrative board told us that they were happy with the turnout and the audience certainly seemed to be having fun throughout the night.

The cultural festival will be hosted again next year, but a date and other details have yet to be decided. If you are interested in helping to plan next year’s festival, please contact Mrs. Watts at kwatts@phm.k12.in.us.