As the week of June 8th.-12th. comes to a close, the PNN media camp rolls on. On Friday, campers will shoot a news show that includes all the stories they ran down this week. 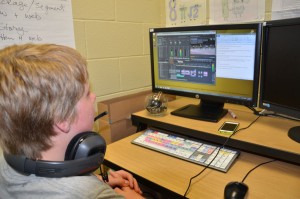 Media-campers have covered a slew of summer programs that are in full swing here at Penn. The Penn Visual Arts Academy is an ambitious, literacy-based arts program that reaches a lot of kids, kindergarten through fifth grade.

The Summer Soccer Program got an early start on the Penn pitch, and it was like walking to another county to cover that story. Campers were jazzed, though, and Jack & Nick gathered information for their story. 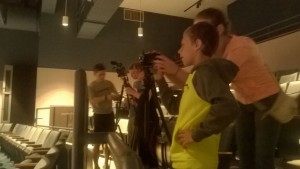 Summer Gym ran in Freed field, and the PNN cameras were there to cover it.

Mrs. Minegar ran the Penn Poms Summer Program on the north side of the school. PNN media-camper, Cora covered that story with PNN producer, Ashley Catanzarite.

Nothing stops the Penn Robotics crowd. Their summer camp has been making noise all week (right next door to the PNN studio). PNN media-camper, Orlando, teamed up with PNN producer, Gary Babcoke, to gather a story worth telling. 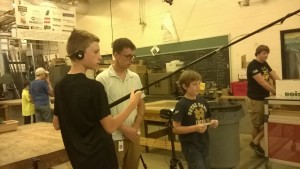 Jack, Orlando and McNulty are busy interviewing campers in the robotics lab.

PNN media-camper, Ted, covered the Penn tennis camp. The trek to the tennis courts was just as lengthy as the trip to the soccer fields. This, too, was worth the walk.

Basketball camp ran this week in the Penn Palace. PNN reporters got up in the balconies and down on the hardwood to cover this intense camp.