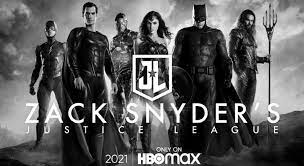 *Spoiler Free* Thursday, March 18th, 2021 the Zack Snyder cut of ‘Justice League’ was released onto HBO max. The 4-hour long movie has been in the works for years, ever since ‘The Man Of Steel’ from 2013 released Zack Snyder has been planning his 3 part ‘Justice League’ films. When production started for ‘Justice League’ an unexpected event happened that would change the entire film. Zack Snyder’s stepped down from the film, which then Joss Whedon took over as director. In 2017 the ‘Justice League’ film was released, and it wasn’t met with the best of reviews. Getting a 40% on rotten tomatoes, losing Warner Brothers roughly 100 million dollars, and with fans being unpleased the “release the Snyder cut” movement began.

People had their doubts about the Snyder cut ever existing until Zack Snyder posted a picture of the film and saying it does indeed exist. The fans demanded the Snyder cut to be released for years until it was finally announced it was happening, and that it will go to HBO Max. Though Warner Brothers did not want this film to happen, Zack Snyder had to agree to Warner Brothers that his film is not cannon. And Zack Snyder has said that Warner Brothers said he is not allowed to shoot new footage for the Snyder cut but he did anyway. There were also rumors that Warner Brothers intentionally leaked a possible Micheal B Jordan superman film to drive away attention from the Snyder cut. We all sat patiently as Zack Snyder teased us with images of his film then we got the trailer and the fans were hyped to see the film. It was originally going to be a mini-series but in January 2021 that was scrapped and it turned into a 4-hour film with different chapters. And on Thursday, March 18th, 2021 the film was released and another version of the film in black and white called ‘Justice League: Justice Is Gray’ will be released(date still to be announced). This movie was met with a 75% by rotten tomatoes and a 97% from fans. The film was a success.

Now since the release of the movie some more news has come out against Joss Whedon who was the director for the 2017 cut after Zack had to leave. Recently Gal Gadot confirmed Joss Whedon threatened her career if she didn’t do what he wanted as well as him threatening the career of Ray Fisher. Also since then, Zack Snyder himself has made comments saying Warner Brothers does not like him and do not want to continue working with him. Warner brothers doubled down on ending the Snyder vision of the DCEU when they released a remastered version of the 2017 cut trailer when not only are fans against that movie but so are the actors and they really put a nail in the coffin when they announced they were going to race swap Kal-el and are looking for a new actor for superman on Henry Cavils birthday. Warner Brothers seem to be doing only what they want and not want the fans to want and in doing so losing the support from what used to be fans.

Overall Review Of The Movie: Zack Snyder’s version of ‘Justice League’ is by far better than what was released back in 2017. The extra 2 hours are used very well as it primarily helps us understand and know the characters better, there were also some pretty cool fight scenes that we saw that weren’t in the 2017 version. The final battle was way longer and it had teamwork compared to its 2017 counterpart where they fought him one at a time and it ended kind of fast. The comedic relief is kind of absent in the Snyder cut other than a few moments and it was mainly Barry to have the comedic relief and he makes the most sense to be the funny one, but in the 2017 version it was left and right from everyone and it really seemed like they were trying to copy Marvel but it just didn’t work. The R rating for this movie I think helps it, for example, it shows how brutal Darkseid and Steppenwolf really are. Overall all the characters are done better, especially Victor Stone. A lot of scenes of his backstory were cut in the 2017 version but in Snyder cut they are there and you get a better understanding of the character. Zack Snyder said he shot some green lantern scenes that would introduce John Stewart’s Green Lantern at the end of the movie, but Warner Brothers put their foot on that and said no. It’s sad his visions won’t be continued, but overall the Snyder cut is the best DC movie I’ve seen produced by Warner Brothers and I’d give it a 9 out of 10.