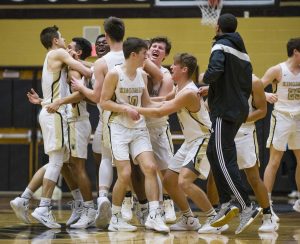 The highly anticipated game started out slow, with a 8-6 lead in favor of Riley at the end of the first quarter. The Kingsmen finally settled into the game in the second quarter under the senior leadership of Kegan Hoskins.

Hoskins entered the game averaging 7.7 points a game and 4.7 rebounds a game, and controlled the glass in the game with 8 boards extending possessions for the Kingsmen and keeping them in control of the game.

The Kingsmen tied up the game going into halftime with a score of 17-17. The second half was led by Drew Lutz  who scored 10 and Noah Applegate who scored 13. 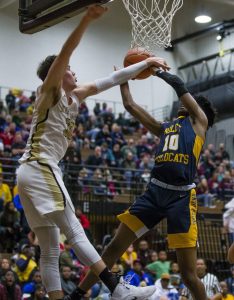 The third quarter was back and forth, and the Wildcats leading the game with 6 seconds left in the quarter. Senior, Beau Ludwick pulled up from the corner, hitting a buzzer-beating three-point shot, giving the Kingsmen a   35-34, going into the final quarter of play.

The Kingsmen remained in control, throughout the fourth quarter, maintaining a lead the entire fourth. The defense by the Kingsmen in the paint, stifled the Wildcat attacks, giving them a single shot as time expired.

The Kingsmen iced the game to advance to the Sectional Semi-Finals against the LaPorte Slicers, Friday at 7:30, back at the Palace.