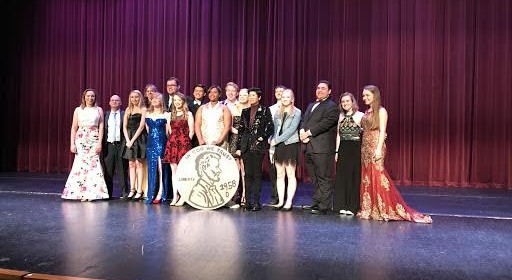 Students gathered in the Center for Performing Arts for a night dedicated to theatre. Many Penny Awards were given out, and several students were inducted into the Thespian Society, an international organization that recognizes and honors achievements by middle and high school students in the theatre arts. The award winners that night were:

Technician of the Year: Ashley Talcott

In A Pinch (Stepped Up When Needed): Kala Key

Congratulations to all who won a Penny Award!

Jake Callender, a senior in the class of 2017, won Best Supporting and Leading Actor in a Dramatic Role. “I am shocked, I wasn’t expecting it,” he said about his wins. “But I’m very thankful, and I’m very happy I got the opportunity to perform with everyone in all the shows this year.”

Mr. Dutton also announced that he would be retiring at the end of this school year. He has taught English, Speech, and Debate classes for the last 44 years. He also directed many plays at Penn High School. He will be missed among the Penn Thespians.