Gensic teaches freshman biology at Penn, and is one of ten nominees for the state-level award this year. He has been teaching for 11 years and started at Penn in 2013.

Of his teaching philosophy, Gensic said in an April interview that, “Students should be given as many opportunities as possible to learn, but it’s ultimately something that happens inside the kid’s brain. Whatever happens in front of a student in a classroom, it’s really the effort of the student to make the connections… to really own it.” 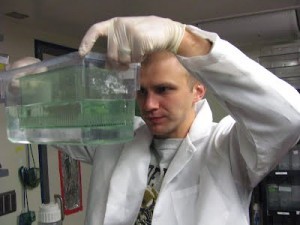 Gensic led a trip for Penn sophomores to Cobus Creek to take real-world samples of water quality data. This data contributed to a restoration project in the Osceola park.

In addition to the PHM Teacher of the Year award and the Indiana Teacher of the Year nomination, Gensic was also selected as a finalist for the Presidential Award for Excellence in Math and Science Teaching (PAEMST), the nation’s highest honor for math, science and computer science teachers.

PNN will keep you updated on any future developments in Gensic’s award-winning career, including the final announcement of the Indiana Teacher of the Year (which is expected to happen in September or October).