The spell bowl team started off the season strong by winning their own invitational with a near perfect score of 87. That win bumped the spell bowl team up to their 18th consecutive win to start off their season.

The spelling Kingsmen then traveled down to East Noble in their second competition of the season. Penn achieved their first perfect score of 90 for the season with all JV and Varsity competitors spelling perfectly. It also marked coach Pete DeKever’s 200th win with both spell bowl and academic super bowl combined. 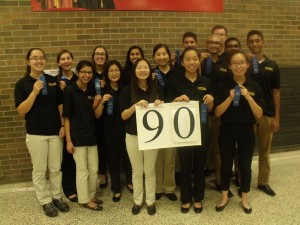 Penn celebrates their perfect 90 score at the East Noble invitational.

Next, the team traveled to Kouts to attempt to retain the trophy they stole last year. They won with a score of 88, marking their 5th consecutive invitational title.

Logansport was the next stop to compete against seven other schools including Plymouth and Indianapolis Ben Davis. The team continued their winning streak by earning a perfect score of 90 in their fourth meet of the season and coach DeKever’s 100th invitational win.

Finally, the Spell Bowl Team came back to battle at home against Kouts and East Noble. The Kingsmen spelled their way to a score of 85, while stealing the win away from their competitors. It was in this meet that coach DeKever celebrated his 1,500th opponent defeated. The following film was shot that night.

The Kingsmen then walked into the state competition with a perfect season under their belts on Wednesday, November 2nd. The spellers won their 19th consecutive regional championship with the highest score in the state of 88. That was enough to take the team to their 20th run to state in 20 years. The team competes this Saturday at Purdue University.

Congratulations to all of the Spell Bowl spellers for an undefeated season, and best of luck in the state finals.